Students of SSPM’s Sri Sri Ravishankar Vidya Mandir proved their excellence yet again at the Bergen Cup 2018, Handball Tournament held at Bergen, Norway. The U-14 boys team (Group B) brought glory to their country and school by winning Bergen Cup 2018.

After a smashing performance that catapulted the U-14 boys team to the finals, hearts were racing and expectations were riding high as the boys team of SSRVM representing India was up against team Sotra, Norway.

In a display of absolute energy and enthusiasm, both the teams enthralled the spectators with their drive and passion to capture the coveted cup. Team SSRVM gave a great chase to team Sotra and knocked them out by a head of 5 points. The defining score was 17 to 12 which cemented the position of team SSRVM as the victors of the day.

The next leg of the International Handball Tournament 2018 will be held at Partille Cup, Gothenberg, Sweden and Dronninglund Cup, Denmark. 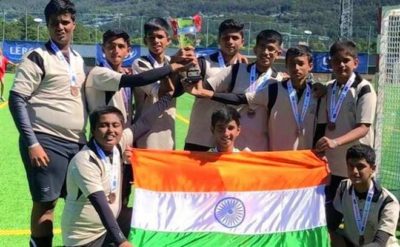